Transitional fossils offer tangible evidence of evolution. Examples include feathered dinosaurs, tetrapod-like fish, and the pterosaur I described in an earlier post. These relics, some of which were predicted before they were found, testify to dramatic changes in lifestyle, body form, and behavior. Lately, a terrestrial fish has me thinking about living species that, like these fossils, appear to be in the midst of evolutionary transitions. Yes, you read that right: a terrestrial fish.

I learned about the Pacific leaping blenny (Alticus arnoldorum) from a recent paper by S. Tonia Hsieh. The leaping blenny belongs to one of two comb-toothed blenny genera whose members spend virtually all of their time out of water. After a planktonic larval phase, these intrepid fish move into the supratidal zone—the wave-splashed area just above the high-water line. There the blennies eat algae scraped from rocks, claim territories around moisture-trapping tunnels, court, lay eggs, and defend their nests. As Hsieh reports from her own field observations,

Blennies knocked off a rock immediately re-emerged on to land. None of the blennies were observed voluntarily entering the water during low or high tide.

As you might imagine, terrestrial blennies exhibit a number of adaptations for living topside. They breathe air through both their gills and skin. They can climb up a vertical sheet of plexiglass. And they can move at a top speed of more than 1.5 meters per second.

Just how terrestrial blennies manage this last trick was the subject of Hsieh’s study. Hsieh shot high-speed video that allowed her to make a detailed comparison of terrestrial locomotion in leaping blennies and their close relatives, some of them amphibious and others fully aquatic. 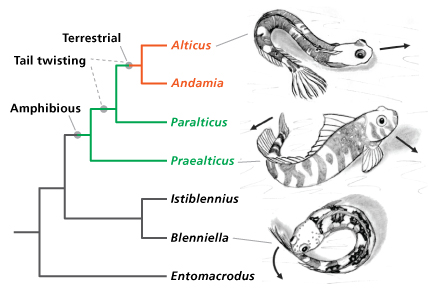 Aquatic blennies that find themselves out of water curl their tail around to their head and fling themselves into the air, but once airborne they flail around out of control (video here).

Amphibious blennies display considerably better coordination. They curl their tail to their head, then push off to make a controlled forward hop (video here).

Terrestrial blennies are in a class by themselves. They curl their tail to their head, twist it so as to press their fanned tail fin onto the ground, then vault forward up to three body lengths at a time (video here and here). 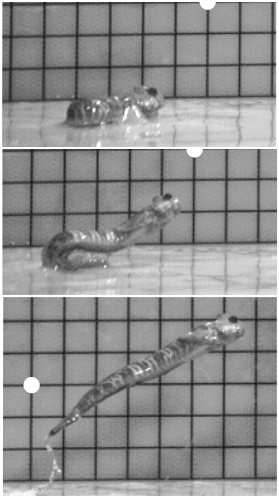 Precisely when the tail-twisting behavior evolved is not clear. Hsieh was unable to film the terrestrial blennies’ closest amphibious relatives, members of the genus Paralticus. Tail twisting must have evolved after the Paralticus lineage diverged from that of Praealticus. It likely appeared before Alticus and Andamia diverged from each other. Regardless of exactly when it arose, however, tail twisting certainly seems to be a key evolutionary innovation in the blennies’ invasion of land.

The amphibious blennies in the genus Praealticus are living transitional forms. They can breathe air and sometimes venture out of the water at low tide to feed on exposed rocks. When out of the water they can move about in a purposeful fashion. However, they lack the tail twisting behavior that enables their terrestrial kin to move so fast across the rocks. And when startled they dive back into the ocean.

Praealticus blennies remind me of another amphibious animal, the hippo. Hippos appear to be the closest living relatives of the whales, and may thus represent a transitional form in the mammalian return to the water.

Whether the Pacific leaping blenny and other members of the genera Alticus and Andamia will also prove to be transitional forms is unknowable. It’s tempting to envision one of them as the future ancestor of an evolutionary radiation of bizarre, fully terrestrial fish. Such a radiation has happened before, of course. We humans are among its progeny.

On the other hand, Jeffrey Graham and Heather Lee have argued that the supratidal zone inhabited by the leaping blenny is as far out of the water as any marine fish is likely to get. (They think the fish whose descendants are now known as tetrapods lived not at the edge of the ocean, but in shallow hypoxic freshwater ponds.)

What’s unarguably true, at least in my humble opinion, is that the existence of such a beast as the Pacific jumping blenny both is surprising and wonderful. It’s a crazy, jury-rigged contraption that nonetheless gets the job done. It shows that a body plan adapted to one lifestyle can be retrofitted for another. And it could only have arisen via descent with modification.

The pterosaur is Darwinopterus modularis. See: Lu, J., D. M. Unwin et al. 2010. Evidence for modular evolution in a long-tailed pterosaur with a pterodactyloid skull. Proceedings of the Royal Society B 277: 383–389.

Hsieh’s report on locomotion in the Pacific leaping blenny is: Hsieh, S. T. 2010. A locomotor innovation enables water-land transition in a marine fish. PLoS One 5: e11197.

For Graham and Lee’s argument that the supratidal zone is the end of the line for terrestrial marine fish, see: Graham, J. B. and H. J. Lee. 2004. Breathing air in air: In what ways might extant amphibious fish biology relate to prevailing concepts about early tetrapods, the evolution of vertebrate air breathing, and the vertebrate land transition? Physiological and Biochemical Zoology 77: 720–731.