How The Gray Wolf Turned Black

Home » All Things SimBio » How The Gray Wolf Turned Black

My previous post concerned an apparently beneficial genetic variant, common in modern humans, that some researchers suspect we picked up via sex with Neanderthals. Attempts to find direct evidence that Neanderthals carried the variant have so far been unsuccessful. But other cases of beneficial variants acquired via hybiridization do exist. This is, for example, how the gray wolves of Yellowstone got their black pelts. 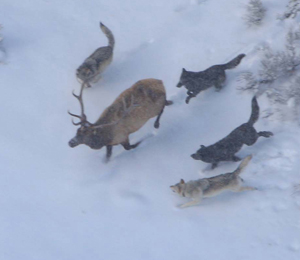 Note the variation among these members of Yellowstone’s Druid Pack, shown here in hot pursuit of an elk. The black pelts of two of the wolves are caused by a dominant allele of the K locus. This locus encodes a protein that binds to the melanocortin 1 receptor, which regulates the production of various forms of the pigment melanin. The dominant allele, which harbors a 3-base-pair deletion, also causes black coat color in dogs.

Despite the fact that the black allele entered the Wolf gene pool only recently, it has risen to a frequency of nearly 20% among North American gray wolves living in forests. The allele has spread rapidly enough to suggest that it confers benefits on the wolves that carry it. As yet, no one knows why.

The photo is by Doug Smith. It can be downloaded from the web site of the National Park Service, and is in the public domain.