Driving home just now through my neighborhood, I encountered an opossum crossing the road. I try not to think or speak ill of any creature (except maybe some pathogens I’ve known only too well), but it’s hard to avoid the impression that opossums are ugly, stupid, and slow. 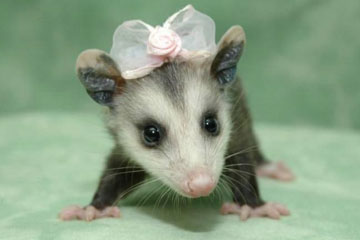 …but seriously, have you met one?

Imagine my surprise when I learned from a recent paper in PLoS ONE that opossums eat pitvipers. Rattlesnakes and lanceheads. Maybe you knew this already. According to the authors, Sharon Jansa and Robert Voss, the behavior was first described by Spanish naturalist Félix de Azara in 1802. But it was news to me. Here’s Jansa and Voss’s account:

Opossums that prey on pitvipers appear to exhibit no behavioral precautions while subduing these dangerous snakes, and they are often bitten in the process.

How can they do this? They’re immune to snakes’ venom. Jansa and Voss show that resistance to pitviper venom is associated with amino acid substitutions in von Willebrand Factor, a protein involved in blood clotting that is targeted by the venom. And they present evidence that the opossums’ von Willebrand Factor gene is evolving rapidly enough to imply an ongoing arms race with the pitvipers. An arms race in which the opossums are the predators and the snakes are prey.

Those are some extreme marsupials.

The photo of Didelphis virginiana is from Wikimedia Commons.