Here’s a question from my daughter’s physics homework. A balloon with a weight tied to it just barely floats. If the balloon is pushed down under the surface of the water, then released, the balloon will: a) float back to the surface; b) sink; c) neither sink nor float.

To answer the question you need to understand Archimedes’ principle and Boyle’s law. 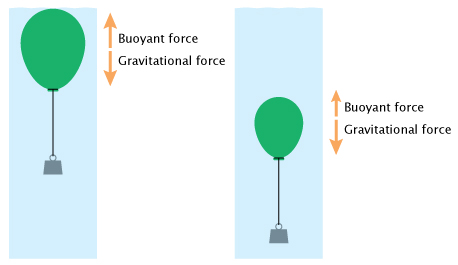 Boyle’s law states that for a fixed amount of gas in a closed system at constant temperature, the product of the pressure and the volume is equal to a constant. If the pressure goes up, the volume goes down. If the weighted balloon is pushed down under the surface of the water, the water pressure on the outside of the balloon increases. This will cause the balloon to shrink (above, right).

The shrunken balloon displaces less water than it did before. This means that it experiences a reduced buoyant force. The balloon’s weight, however, has not changed. Now that the force of gravity on the balloon exceeds the buoyant force, the balloon will sink.

The correct answer is (b).

Now imagine that instead of just barely floating, the weighted balloon floats easily. If we push it just a little under the water, it will displace more than its weight in water. Released, it will bob back to the top. If we push it deep enough under the water, the balloon will shrink to the point that it sinks as before. Somewhere in between is a sweet spot, where the balloon will neither sink nor float. It will displace exactly its own weight in water, and will be neutrally buoyant.

Which brings me to the argonaut octopus and a paper published today in the Proceedings of the Royal Society by Julian Finn and Mark Norman. The argonaut is sometimes called the “paper nautilus” because of its superficial resemblance to the chambered nautilus, but the two are only distantly related. The argonaut’s most distinctive feature is the ornate and delicate shell produced by the female. (The male, which is tiny compared to the female, doesn’t make a shell.) 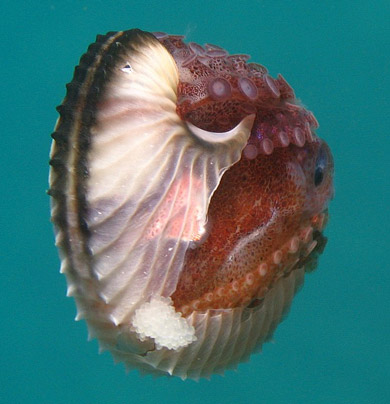 Finn and Norman have confirmed yet another hypothesis about the function of the shell. The key was to watch how argonauts behave in the wild—and to harass them just a little bit. Finn and Norman caught a few females, kept them in an aquarium for a while, then released them where they could film the creatures in action. Before letting them go, the biologists tilted them around under water to release any air trapped in the argonauts’ shells.

Upon gaining their freedom, all the argonauts did the exactly the same thing. They swam straight to the surface, pushed their shell up high enough above the water to catch some air in the shell’s small end, sealed the air inside with a pair of their arms, then jetted downward toward the bottom. This required some application of force, because the amount of air trapped in shell made the argonauts positively buoyant. As they swam deeper, however, the increasing water pressure compressed the bolus of air and the buoyant force declined. At a depth of 7 to 8 meters the argonauts attained the sweet spot at which they were neutrally buoyant. Photos of an argonaut capturing air in her shell are available at New Scientist’s website, which put me onto the story.

Finn and Norman suggest that biologists watching argonauts in aquaria failed to discover the function of this remarkable behavior for a simple reason: The tanks were too shallow. If they can’t dive deep enough to sufficiently compress the air they’ve collected, the argonauts bob back to the surface—which is, indeed, where captive argonauts are often seen.

Once the female argonauts participating in Finn and Norman’s study had achieved neutral buoyancy, they could maintain their depth in the water without effort. They earned an A in physics. And they could jet fast enough to escape from a pair of scuba-diving biologists.

The complete citation for Finn and Norman’s paper is Finn, J. K., and M. D. Norman. 2010. The argonaut shell: gas-mediated buoyancy control in a pelagic octopus. Proceedings of the Royal Society B: Published online ahead of print. doi:10.1098/rspb.2010.0155.

The argonaut photo is by Bernd Hofmann and is licensed under the Creative Commons Attribution-Share Alike 2.0 Generic license.