The Role of Charisma in Teaching

In an earlier post, I wrote about a classic paper from the education literature called The Dr. Fox Lecture: A Paradigm of Educational Seduction. The authors coached an actor to spout nonsense with authority and charm, introduced him as an expert, and let him regale an audience of mental health professionals on a topic he knew nothing about. The listeners gave “Dr.” Fox high ratings on a post-lecture evaluation, from which the authors concluded that even sophisticated learners can be tricked into mistaking form for substance.

The trouble is, the study was poorly designed. The researchers neglected to include a control group. Neither did they test for student achievement. Because the audience might have learned something despite the authors’ best (or should I say worst?) intentions, there is no empirical support for their claim that the lecture was as useless as they meant it to be.

Much to his credit, one of the authors of the original Dr. Fox paper enlisted a new collaborator and ran a real experiment. The experiment was randomized and controlled, and it included achievement tests. This design, and the clear results, allow us to draw more meaningful conclusions about the role of charisma in teaching.

John Ware and Reed Williams randomly assigned 207 undergraduate and graduate students to six groups. Each group watched a different 20-minute videotaped lecture on the biochemistry of memory. All the lectures were delivered by Michael Fox, the same character actor who posed as the expert teacher in the earlier study. The six lectures varied in two ways.

The other way the lectures varied was in form. At each content level the actor delivered one of the lectures “in a seductive manner,” and the other lecture without seduction. The characteristics that made the seductive lectures beguiling included enthusiasm, humor, friendliness, expressiveness, and personality. The seduction-free lectures lacked these traits, and must have been pretty dreary affairs.

Following the lecture, each student took a straightforward 26-point test on the teaching points covered in the most substantive lectures, and rated their satisfaction with the lecture they watched on a standard course evaluation form.

The results for the achievement tests appear below. 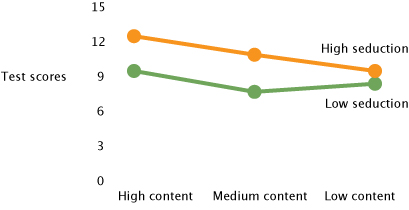 Content coverage and presentation style both influenced student learning. Students who watched lectures featuring more teaching points scored better on the test. So did students who watched lectures delivered in a more engaging manner. These effects were statistically significant, and were independent of each other. That is, the data show no greater or lesser effect of content coverage for high versus low seduction lectures.

None of these patterns may come as a surprise. This one, however, might: Presentation style explained more of the varition in student performance than content coverage.

Here are the results from the student evaluations. 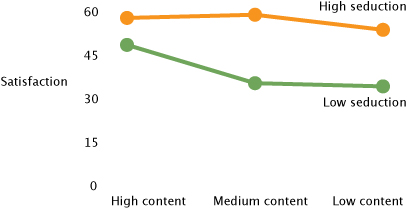 As on the achievement test, content coverage and presentation style both influenced student satisfaction. Students gave better reviews for lectures featuring more substantive content, and for lectures by a livelier instructor. Again, these patterns were statistically significant. They were not, however, independent. Content coverage influenced student satisfaction only when the lecturer lacked personality. When the lecturer was warm and entertaining, the students were highly satisfied regardless of how much material he was actually giving them.

Ware and Williams concluded that “the Dr. Fox effect appears to be more than an illusion.” Consistent with the first Dr. Fox paper, charisma can fool students into giving instructors with poor command of their subject matter higher marks than they deserve. But a general preference among students for teachers with appealing personalities is likely justified. That’s because, all else being equal, when students take classes from appealing teachers they learn more.

The Ware and Williams study reminds me of something my mother once told me. Mom was a career politician with an impressive record of substantive accomplishments. She studied hard, and knew more about the issues than anyone else in town. But she also learned early on that “Looking like you know what you’re doing is 90%.”

In other words, presentation matters. Effort we teachers devote to the look and feel of our materials is at least as important as the content we cover.

The experimental study I discuss here is: Ware, J. E., Jr. and R. G. Williams. 1975. The Dr. Fox effect: A study of lecturer effectiveness and ratings of instruction. Journal of Medical Education 50: 149–156.

I prepared the graphs from Ware and Williams’s Table 1.