Survival of the Fittest? Not Always.

Home » All Things SimBio » Survival of the Fittest? Not Always.

Are the fittest always the ones who survive? I’m thinking of “fitness” in its everyday meaning, not its technical meaning. We might expect that the strongest, most muscular individuals would be least likely to be captured by predators. But that’s not always the case.

Consider a study published earlier this year by Meritxell Genovart and colleagues. They took advantage of a culling program initiated by the local government in the Balearic Islands of Spain to control a burgeoning population of yellow-legged gulls. 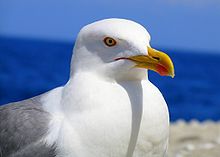 The program used two methods to thin the gull population: Some gulls were shot by humans; others were taken by trained falcons and hawks. The researchers examined 506 gulls collected by human hunters and 122 gulls collected by raptors. Here are the data for the gulls’ muscle condition:

Look first at the blue bars. These show percentages for the birds shot by humans, presumably a random sample of the population. Most birds have normal muscle condition, a few are scrawy, and a few are unusually buff.

Now look at the green bars. These represent the birds taken by raptors. The birds with normal muscle condition are underrepresented. The scrawny birds are overrepresented, which comes as no surprise. We expect predators to prey on the weak. But the buff birds are overrepresented too. Perhaps their extra bulk and weight made them slower or less agile. Or perhaps these meaty chickens were just especially attractive targets for hungry falcons.

The paper by Genovart and colleagues is Genovart, M., N. Negre et al. 2010. The young, the weak and the sick: evidence of natural selection by predation. PLoS One 5: e9774.

The photo of a yellow-legged gull is by Stefano Corso and is licensed under the Creative Commons Attribution 2.0 Generic license.

I prepared the graph from data in Genovart’s Table 3.