Among the useful things I learned while teaching high school many years ago were two sure-fire strategies guaranteed to get the attention of any audience any time: You can talk about sex, or you can gross ’em out. Among the things I love about teaching biology is that it offers plentiful opportunities to do both. In this spirit, I’d like to tell you about canine transmissible venereal tumor (CTVT).

CTVT is, as its name suggests, a contagious tumor that grows on the genitalia of dogs. It spreads from dog to dog during copulation. The photo below shows what cells from a tumor look like under a microscope. 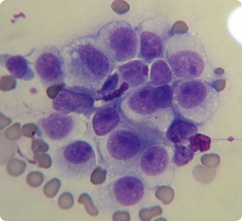 If you really have to see it, and if you’re comfortable with explicit content, you can find a photo of a tumor on a male dog’s privates here. Don’t say I didn’t warn you.

Contagious tumors that spread via sexual contact are pretty scary. But you’ve heard about them before. Cervical cancer, for example, is often the result of a human papillomavirus (HPV) infection. Infection with two high-risk strains of HPV, that together cause 70% of cervical cancers, can now be prevented by a vaccine.

The twist with CTVT is this: Many of the researchers who study it have long suspected that the transmissible agents that carry CTVT from dog to dog are the tumor cells themselves. In other words, the hypothesis is that CTVT is caused not by a virus, or by a carcinogen, or by a faulty gene. Instead, it’s caused by bits of the abnormal tissue mass rubbing off of one dog’s parts and sticking to another’s. Where I come from, things like that aren’t supposed to happen.

Other researchers have suggested that CTVT is caused by a virus that remains to be identified. 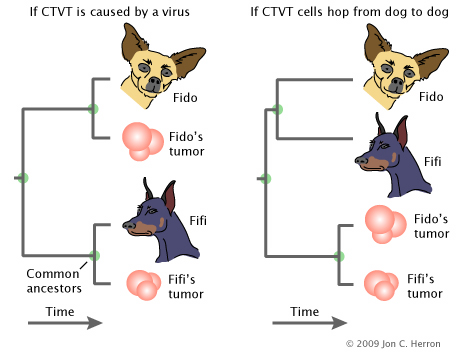 For a primer on reading and using evolutionary trees, and an introduction to using genetic data to estimate evolutionary history, see SimBio’s Flowers and Trees and Domesticating Dogs labs.

Claudio Murgia and colleagues published an evolutionary analysis of 11 dogs and their CTVTs in Cell in 2006. Here is the key result: 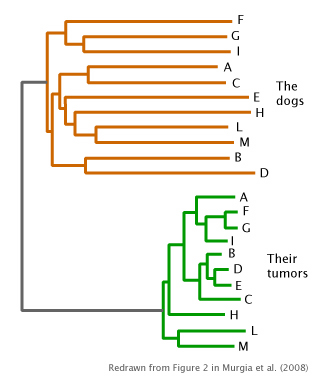 The tumors are all more closely related to each other than any of them is to the dog it is growing on.

In other words, a CTVT is not really part of the afflicted dog. It is a distinct animal, descended from a dog—or a from wolf (more on this shortly). It no longer has four legs, or fur, or teeth, or nobility of character; instead it lives as a parasite on other dogs.

Clare Rebbeck and colleagues published a more detailed evolutionary analysis in the September 2009 issue of Evolution. They looked at 37 tumors from dogs on four continents. They confirmed that there is much less genetic varition among tumors than among dogs—even dogs of the same breed. This pattern is consistent with the notion that CTVT reproduces by cloning itself as it moves from host to host.

Rebbeck reconstructed the evolutionary history of dogs, wolves, CTVT, and a variety of other species in the dog family. Their evolutionary tree shows that CTVT is derived from a dog or a wolf, but does not allow them to infer which.

Rebbeck estimates that the last common ancestor of dogs, wolves, and CTVT lived about 6,000 years ago. In contrast, the last common ancestor of all extant CTVTs lived roughly 200 years ago. The implication is that a new strain of CTVT recently appeared, derived from the older CTVT linneage, and has since spread rather quickly around the world. The tumor seems to be adapting to its parasitic lifestyle. It has, for example, evolved a variety of mechanisms for evading its host’s immune system. (Fortunately for its victims, these mechanisms aren’t perfect. Most dogs parasitized by CTVT fight it off after several months.)

The primary literature on evolution doesn’t usually read like horror fiction. But the CTVT story reminds me of Arch Oboler’s Chicken Heart, best known through this classic Bill Cosby sketch.

Thank you for your attention.

The photo of CTVT tumor cells is by Joel Mills, is licensed under the GNU Free Documentation License, and is available here.