If we can control evolution well enough to turn wolves into poodles, why can’t we use the same method to turn viruses into magic bullets for cancer? Virologists are trying to do just that.

Part of what makes cancer so hard to treat is that, with a few notable exceptions, tumors are composed of the patient’s own cells. The perfect therapy—a magic bullet—would target and kill the cancer cells while ignoring normal cells. That’s not an easy weapon to design, because cancer cells and normal cells are so similar.

But weapons that attack narrow categories of cells already exist in nature: viruses. Sexually transmitted strains of HIV-1, for example, attack and kill immune system cells whose membranes contain two particular proteins (CD4 and CCR5). They leave most other kinds of cells alone.

Some viruses seem to naturally target cancer cells in preference to normal cells, apparently because the viruses exploit the very abnormalities that turned the cancer cells malignant in the first place. Case histories as far back as a century ago have described leukemia patients that showed improvement—unfortunately, only temporarily—when they caught the flu. Chickenpox and measles, among other viruses, have also been anecdotally credited with inducing temporary remissions.

These and similar observations have prompted recurrent waves of research on viral cancer therapies. The present wave has been underway for two decades. The first virus approved for sale as an anti-cancer treatment is ONYX-015, which got the green light for use in China in 2005. ONYX-015 is a genetically modified strain of Adenovirus H101.

Following a general approach pioneered by Alice Moore in the 1950’s, Irene Kuhn and colleagues have been using natural selection in the lab to develop more effective cancer-fighting adenoviruses. The basic idea is to cultivate a population of viruses for several generations on a host population of cancer cells. The viral population should undergo adaptive evolution in this laboratory environment, hopefully becoming a better cancer killer at the same time.

As users of the Darwinian Snails lab in EvoBeaker learn by experimentation, the capacity of a population to evolve depends on how much genetic variation there is among its members. To increase the amount of genetic variation in her starting adenovirus population, Kuhn took advantage of the fact that there are dozens of varieties of human adenoviruses. (Most human adenoviruses cause mild respiratory infections, but one—the infamous Adenovirus-36—has been implicated as a cause of obesity.)

Kuhn mixed seven different kinds of human adenovirus and grew them at high density in cultured colon cancer cells for two generations. (I’m using ‘generations’ loosely here; Kuhn grew the viral population for two transfers to a new dish.) The high density of virus particles meant that many of the host cells were simultaneously infected by more than one kind of virus. This, in turn, allowed the viral genomes to recombine—that is, to swap bits of DNA. The result was a population of adenoviruses with a great deal of genetic variation. 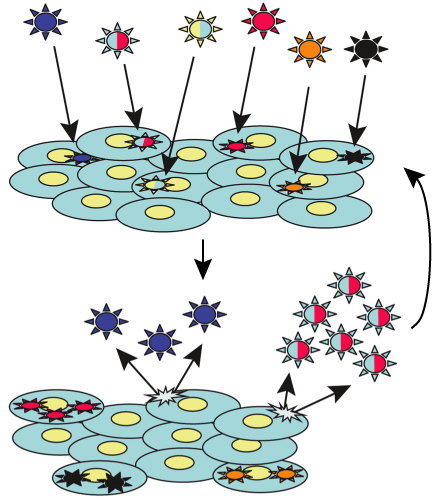 Kuhn tested ColoAd1’s potency as a therapy for colon cancer by using it to treat the disease in laboratory mice with compromised immune systems. She injected human colon cancer cells each mouse’s liver and waited two weeks for tumors to grow. She then gave each mouse an intravenous injection with either saline solution only (the control), solution containing ColoAd1, or solution containing ONYX-015. Two weeks after that, Kuhn killed the mice and weighed their liver tumors. The results are shown below. 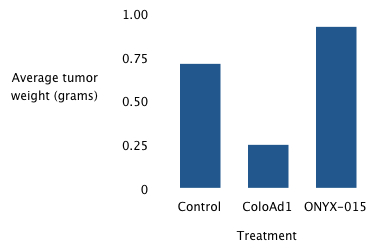 ColoAd1 was significantly more effective in shrinking the liver tumors in the mice than either the control treatment or ONYX-015. (For details on the variation among mice and the statistical tests see the Kuhn’s original illustration.)

Just because ColoAd1 shrinks tumors in mice with compromised immune systems does not mean the virus will help human colon cancer patients. A general problem with viral anti-cancer therapies is that the patient’s immune system usually recognizes the virus as a foreign invader and eliminates it from the body. But virologists working on cancer treatments have other tricks up their sleeves, including adding or removing genes from therapeutic viruses. And a virus that is partially effective on its own may be useful in combination with chemotherapy, surgery, or other procedures. It’s a long way from the research lab to the treatment ward, but—perhaps with some help from evolution by natural selection—effective therapies may lie ahead.

For the report on selective breeding of cancer-fighting adenoviruses, see Kuhn, I., P. Harden et al. 2008. Directed evolution generates a novel oncolytic virus for the treatment of colon cancer. PLoS One 3: e2409.

For a slightly dated review of recent research on viruses as anti-cancer therapies, including some of the mechanisms that cause viruses to target cancer cells over normal cells, see Parato, K. A., D. Senger et al. 2005. Recent progress in the battle between oncolytic viruses and tumours. Nature Reviews Cancer 5: 965-976.

For a news piece on the approval of ONYX-15 in China, see Garber, K. 2006. China approves world’s first oncolytic virus therapy for cancer treatment. Journal of the National Cancer Institute 98: 298-300.

All illustrations are either modified or redrawn from Kuhn, I., P. Harden et al. 2008. Directed evolution generates a novel oncolytic virus for the treatment of colon cancer. PLoS One 3: e2409. Published under the Creative Commons Attribution License.